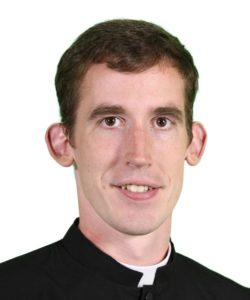 I am the fourth of five children in my family. I have two older sisters, an older brother, and a younger sister. I was born in Dallas, Texas and lived there for seven years. My dad was laid off and he was able to find a job in Gainesville, Georgia. We lived in Gainesville for four years and went to St. Michael’s in Gainesville for those four years. After that, my dad lost his job again. He found a new job and we moved to LaGrange, GA and went to St. Peter’s Catholic Church. I lived there for about 7 years before heading to college. For college, I lived with my sister and her husband during my first two years of college in Calhoun, GA. My junior and senior year I transferred to Georgia College and State University and lived there in Milledgeville.

A couple of my hobbies are running, reading, and sports. I started running in my junior year of college when I was asked to run a half marathon with a couple of my friends. I trained for that run for a couple months and I haven’t stopped running since. Since that time I have run two half marathons and a half dozen 5k runs. I also like to read, often while I’m running. Some people like to listen to music while running, I like to listen to books. I will get audio books and listen to them. I like to read science fiction and fantasy books, similar to Lord of the Rings. I also enjoy playing and watching sports, especially baseball, basketball, and football. I even get the opportunity to play basketball and flag football at seminary.

One of my favorite scripture verses is John 15:15 which says, “I no longer call you slaves, because a slave does not know what his master is doing. I have called you friends,[a] because I have told you everything I have heard from my Father.” This understanding that Jesus is inviting all of us to this friendship with Him is just beautiful to me and because it is an invitation, it makes me constantly self-reflect. What is my response to this invitation? How much am I giving to this relationship? Can I give more? Am I talking to Him on a daily basis through prayer and acting in a way that He would be proud of?

This is a tough question. My confirmation saint is St. Benedict but I wouldn’t say he is my favorite saint. I would say my favorite saint is Mary but that seems a bit too easy since she is our mother. Instead, I’ll give you my second favorite saint, who is St. Joseph. I did not have a devotion to him until I joined seminary. But as I reflected more on Joseph and his role in the holy family, I came to realize the fortitude he practiced by taking Mary as his wife and raising our Savior. It is this fortitude that St. Joseph practiced that I pray he intercede to God for me that I may have that same courage for these years in seminary and God willing, in ministry as a priest.

I was 23 years old when I joined seminary. I have thought about becoming a priest since the beginning of high school. I was home schooled throughout high school and this had a huge impact on my life. I was able to receive a good Catholic education that helped me to understand the faith well and to have a firm foundation to face the challenges of college life. Home schooling also allowed my family to attend Mass twice a week. With this habit established when I went to college, it felt strange not to go to Mass when I was able. It was this firm foundation in my faith and time with our Lord at Mass and Christ speaking through the priest in those homilies that brought me to seminary.

Seminary life is awesome. My favorite part is probably the community. Being able to make friends and talk with so many men, who are discerning priesthood, is beyond words. Throughout the year, we have various sport activities that go on, with scrimmages and practices, usually at least once a week. In the fall, we have a flag football team that I am on and we play intramurals with one of the local universities. We also have a basketball team that takes part in a tournament with 10 other seminaries. And we have a soccer team that scrimmages as well. This community, that I call family, has played a huge part in my formation and discernment. Not to say there aren’t challenges when living with 130 men in the same place, because there definitely are, but even in those challenges, there are moments of growth and that is one of the beauties of seminary life. Blessings abound.

The one thing I look forward to most is being able to live in and have the opportunity to minister to a community and by doing so, they may encounter Christ and build true and lasting friendship with Him. I think this encapsulates a lot of what priesthood is. I look forward to being able to minister the sacraments: Eucharist, confession, baptism, etc. I look forward to helping others through spiritual direction and counseling. I received my bachelors in Psychology when I went to college because I wanted to be able to help others in a counseling role. Ultimately, I want to grow with the community. I want to baptize babies and see them grow up and receive their first communion. I want to see them confirmed and eventually married. I want to not just be a part of the community, but a part of the family. The family of faith.

What I have to say probably isn’t anything new to those thinking about priesthood but I hope by me saying it again, it puts an emphasis on how important these three things are. First, prayer is so important. In my time in college, I can see a positive correlation of when I prayed and when I was felt called to be a priest. When my prayer life was good, I wanted to be a priest more than anything, but when it was bad, priesthood wasn’t even on my radar. Second, friendships are so important. If you are thinking about becoming a priest, talk with your friends about it. They can be so supportive and help you in your journey. Third, talk to a priest. They know so much and have so much first hand experience when it comes to discernment that they are more than happy to share, usually. I didn’t talk to a priest much while I was discerning but looking back, I wish I had. I probably would have joined seminary a year earlier, not taking a gap year after graduating college. Pray and talk to friends and priests, and allow God to work through them.