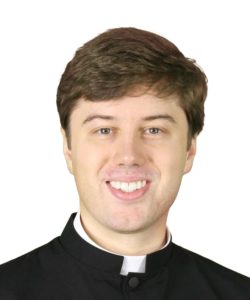 I come from a non-Catholic household, but from a family supportive of my vocation. I am the first of two children and have a younger sister. I grew up across the world, but primarily in Dunwoody, Georgia. I was born in Decatur, Georgia, and my family and I moved to Japan when I was 5, and a few years later to Australia. Upon returning to Georgia when I was in late elementary school, we settled in Dunwoody where I stayed until college.

Many things. I particularly enjoy philosophy. There is nothing quite like a good philosophical discussion, and it is one of the ways I came to the faith. Among other things, I also like painting and weightlifting.

It would easily be the Suffering Servant prophecies in Isaiah 52:13-53:12. To me there is no more obvious prophecy of Christ’s coming than this one and we have proof this was written well before Christ’s birth. I still get chills to this day reading it or hearing it read.

St. Anselm of Canterbury. He was largely responsible for my continued desire to study philosophy when I was first introduced to it in my undergraduate studies. His combination of zealous medieval faith and strict rationality was very attractive to me before I converted. I find two of his works to be some of the greatest contributions to the corpus of human intellectual thought. These works were largely responsible in helping me ground my faith in Catholicism.

My vocation story begins with my conversion to Catholicism and Christianity in college. Since that time I always had it in the back of my head to be a priest. This “thought” was somewhere between a desire and an intuition that I should. I still pursued a career in law and, more specifically, law enforcement. I put the thought of priesthood aside for some time, and did not too actively discern it, but constantly prayed about it. I finally faced it more seriously when I started practicing law and entered seminary about 3 years after I became a prosecutor for the state of Georgia.

Excellent. I feel right at home here, and the comradery and studies are a joy to me. I enjoyed my time in law, but much of the studying and practice would often feel forced; like putting a block through a round hole. Studying here, though it does take discipline, is much more natural for me.

Helping others be reconciled to God and being able to artfully articulate the faith through philosophy and theology to those who are questioning it. I guess that would mean I look forward to confessions, preaching, and counselling on the faith the most.

Put aside anxious and distressful thoughts. Such thoughts I think are the largest barriers to priesthood. It is often lack of trust in God, inordinate attachments to things, or simple psychological or spiritual barriers. Read the saints and the Gospels on this topic of unhealthy fear. Also, brother, get a good spiritual director in the Church so you can get help in discernment! The Church has been in the discernment business for centuries on centuries, and we have been in that business for only, what? A decade or two at most?